The Orthophonic Victrola-Radiola 7-3 was similar to the 7-30 and the Alhambra I Victrola-Radiola. The intoductory price was $375 including the tubes. The radio, located under the left lid, was RCA's Radiola 20, a popular tuned radio-frequency(TRF) receiver which used four UX-199 and one UX-120 tube. Power was provided by three 45 volt, one 22.5 volt, one 4.5 volt and six 1.5 volt batteries. Because the tubes were still a novelty, they were exposed for the public to view. Under the right half of the lid was the standard Victor turntable with gold-plated controls.

For more information about the contents of this collection, e-mail sp_coll@library.msstate.edu. 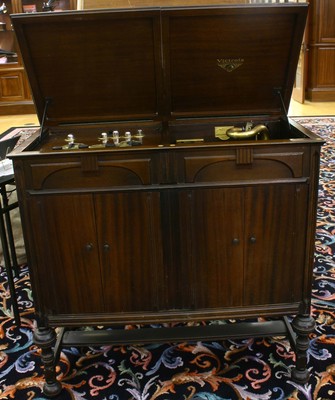