On the Timeliness of Precarity-Critique Today

Now is a propitious time to re-examine the present forms and political implications of precarity. As my colleagues and I write the essays for this special issue of Emancipations, questions abound regarding the manifestations of precarity that have appeared since popular movements in France first adopted the slogan of ‘the precariat’ in the early 2000s. Then, ‘precarity’ fit as an intuitive name for people’s negatively altered living and working conditions as national governments, corporations and supra-national institutions consolidated neoliberal transformations as, indisputably, the new norm. Two decades hence, should this situation simply be reaffirmed as the not-so new normal?

Introduction: On the Timeliness of Precarity-Critique Today
Paul Apostolidis

Life and Precarity in the Border Zone of War: Insights from Ramtha, Jordan
Yazan Doughan

Precarity and Prospects for Commoning: A Conversation with Guy Standing
Guy Standing and Paul Apostolidis 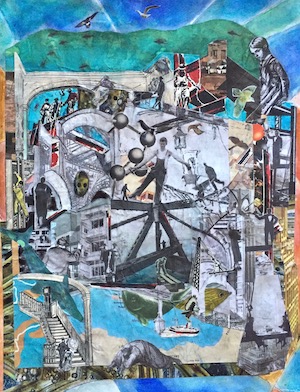 Ronald F. Sauer was born in 1950 in midtown Manhattan’s “Hell’s Kitchen” in New York City. He died in 2019 in San Francisco, where he’d lived since the 1970s with some intervening years abroad in Amsterdam, Paris, and Czech Republic. Ronald was an artist and poet, a jack-of-many-interests, a translator of French poetry, a musician, an art enthusiast and promoter of group art shows, a sometimes professor on film and literature, a lover of history (or “gypsy scholar” as he termed it), a wit and compulsive talker, and a habitué of flea markets. Thus, his mixed-media collages (combining as they do a watercolour backdrop on which he erects Escher-like architectures of cultural artifacts laced with a kaleidoscopic circus of human foible) perhaps best display in visual terms his sarcastic surrealist humour, his tenderness toward beauty, and his tireless fascination with the human comedy...and its precarity..